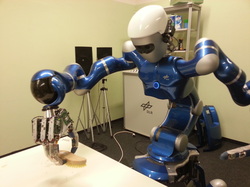 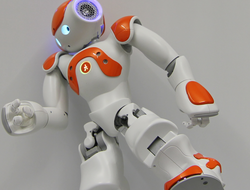 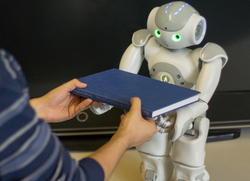 Physical Human-Robot Interaction:
Close physical interaction between robots and humans is a challenging aspect of robot development. For successful interaction and cooperation, the robot must have the ability to adapt its behavior to the human counterpart. I am investigating the development and evaluation of computationally efficient machine learning algorithms that are well suited for close-contact interaction scenarios.
VIDEO
_ 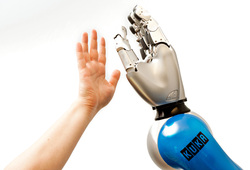 Interaction Primitives:
To engage in cooperative activities with human partners, robots have to possess basic interactive abilities and skills. However, programming such interactive skills is a challenging task, as each interaction partner can have different timing or an alternative way of executing movements. We proposed to learn interaction skills by observing how two humans engage in a similar task. To this end, we introduced a new representation called "Interaction Primitives". Interaction primitives build on the framework of dynamic motor primitives (DMPs) by maintaining a distribution over the parameters of the DMP. With this distribution, we can learn the inherent correlations of cooperative activities which allow us to infer the behavior of the partner and to participate in the cooperation